Prior to the analysis of the types of stresses and deformations that are subjected to a buried pipe, the main factors should be identified.

As a result, the main forces to consider in a PVC-O buried pipe are: the internal pressure, the field forces and the traffic.

Both the characteristics of the pipe and its working conditions play a relevant role in its resistance and deformation.

The soil features involved in the soil load calculation are the following:

Compression modulus in different areas of the backfill and the trench, E1, E2, E3 y E4, in N/mm2. 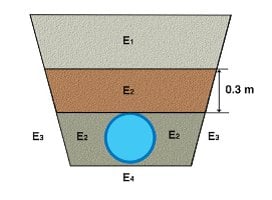 Four types of soil can be considered::

As per the values ​​of the backfill angle of inner friction (ρ), without trial data, UNE 53331 standard recommends the values as stated:

And from the backfill angle of inner friction, ρ, the backfill friction angle with the walls of the trench, ρ’ is set, under the assumptions:

Lateral thrust coefficients of the backfill are defined as follows:

K1: backfill coefficient used above the upper generatrix of the pipe.

K2: backfill coefficient used around the pipe up to the upper generatrix.

The calculation of the compression modulus in different areas of the backfill and the trench, the CBR (California Bearing Ratio) method is applied, using a round plate with a 700 cm2 surface area. The Es values, ​​in N/mm2, are given by the following expression:

R: Radius of the loaded plate, in mm.

If trials are not performed, the values ​​of E1 and E2 can be taken from the table below, according to the degree of compaction specified for the backfill and according to the type of soil.

It is possible to take E1 = E2 when the material and compaction of the backfill in both areas are the same. The values of E3 and E4 must be chosen according to the actual conditions of the land of the trench. If said values are known, it may be considered that E3= E2 and in installations under embankment, it will be assumed that E1 = E2 = E3.

For normal soils, E4 value is obtained from the table below.

There are certain pressures on vertical pipes that can be divided as follows:

Concentrated overloads: These are caused by punctual traffic loads located on the wheels. To obtaining it, the value of the concentrated load, Pc, in kN, should be found:

The groundwater forces in an installation have a lower extend than the forces above detailed. The influence on the stress and deformation in a trench is minor when compared to the other installation parameters.

An important consideration related to the groundwater forces is the buoyancy of the pipe due to hydrostatic and uplift forces that require concrete ballast to be sized and installed to counteract this strain.

Results of the study cases

Influence of the trench and slope installation parameters.

There are several external factors that might be considered to validate the pipeline installation conditions. Characteristics related to Service pressure, traffic and type of soil are the factors with the greatest contribution.