I am just getting back to you regarding the trial for the Nova Siria End Restraint Flange Adaptors (for 426mm Cast Iron) we used at Yarnton Way, Thamesmead last week.

The fittings were ordered with you after checking that framework suppliers were not able to offer such a fitting, in end restraint, due to the diameter ( 426 cast ) This was approved by Mike  at Thames who is showed strong interest to trial these fittings as they are both universal and unique.

Skanska main laying teams had not seen this type of fitting before and were skeptical as to whether the fitting would inhibit the installation times. However as Paul site agent ) commented ‘The Lads that installed these fittings thought that they would be quite difficult, and take a long time to fit, but were surprised just how easy and quick they were to install. 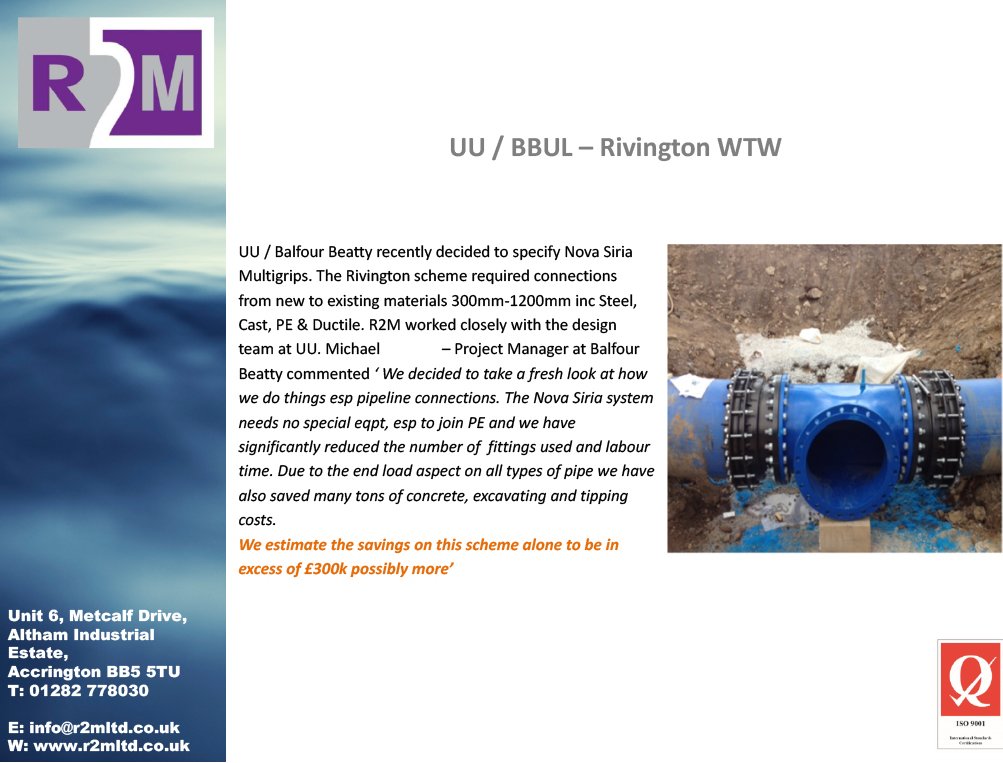 Re-lining the three 1000mm pipelines along the 50miles of the VYRNWY large diameter trunk mainis one of the biggest water pipelineprojects ever undertaken by Untited Utilities (UU).The pipelines run from Lake Vrnwy in Mid wales through the Treatment Works at Oswestry and feed the whole of Liverpool (approx.: 12% of all United Utilities water )  The old unlinedcast iron host pipelines are being lined with thin walled SDR51 Polyethelene (PE)pipe.

One of the many difficulties faced by the UU along with the Balfour Beatty Civil engineering construction Team, was to find the best way to connect the host Cast Iron pipeline to the PEliner pipe.  End restraint couplings were the favoured option and the team from UU and MWH Ltdresearched the market and asked R2M / Nova Siria to look at further development of the already successful Multigrip end restraint fitting so that it could grip the PE liner and provide seals on both the PE & Cast Iron host main.

R2M Ltd. based in Accrington worked closely with the design team at UU and fed the information to the design team at Nova Siria in Italy. In the space of just 6 months R2M / Nova siria developed a variation of the “ Multigrip” Flange adaptor with an extra seal on to the host pipe.  This new fitting is now called the   “ Novagrip” and was independently tested by Exova to 20.5 bar

The team at UU also wanted more flexibility and a faster installation times so Nova Siria manufactured the Novagrip with a  30mm tolerance making it much easier to fit on to the often uneven old cast iron mains.

Before such a high value order was placed, representatives from U.U, MWH, Balfours and Exova travelled over to Italy to witness the manufacturing process, the rilsan coating method and pressure testing procedures.  They were clearly satisfied with what they saw because a call off order was placed on their return.  Denholme Pipecare were the specialist contractor appointed to carry out the swage lining operation.  The first installations of over hundred fittings that will eventually be used on phase 1 have been successfully completed and the project is well under way. Mike , UU Project Manager “R2M and Nova siria have been able to deliver on what the promised at the outset, both in terms of developing a new fitting to meet our specific needs and also the speed of delivery to site.  The support, co-operation and communication during design development and installation has been excellent and the Novagrip is contributing to the success of the Vyrnwy project”

It will be 2021 before the project is expected to be completed.  Water quality will be guaranteed for many years to come as result of this huge undertaking. 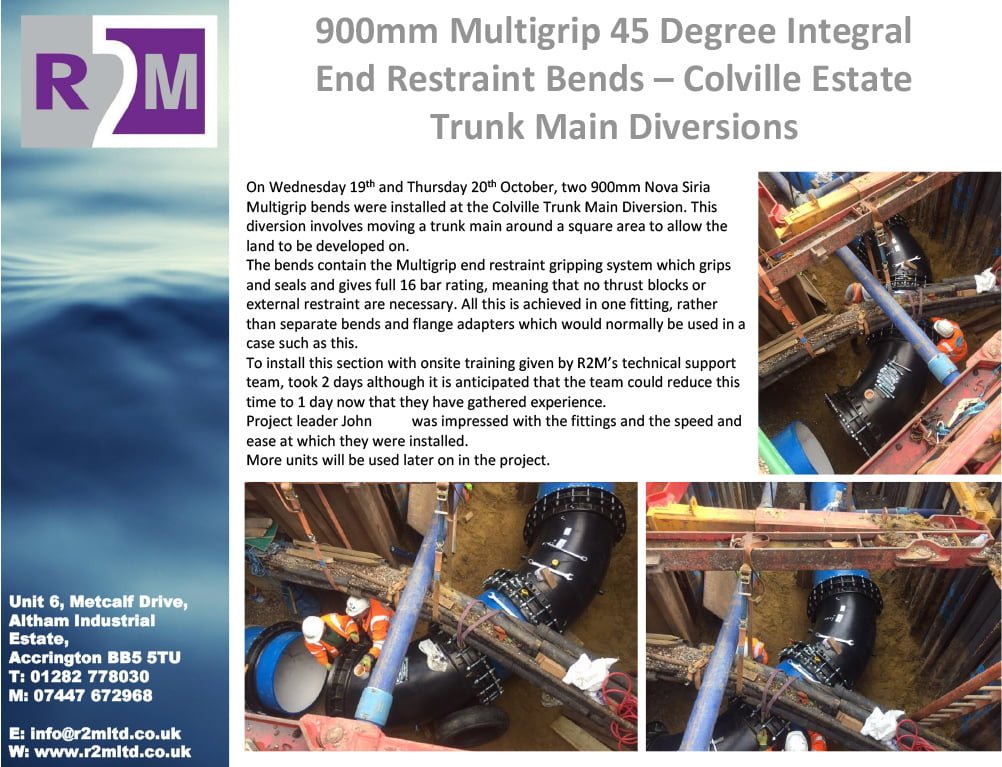