Molecor PVC-O pipes at low temperatures: no practical effect on pipe installation and use

The durability of PVC-O pipes is not negatively affected by weather changes or by extreme low temperatures. What is more, PVC-O pipes have performed well in extreme climates being, regarding installation and use, fully operational. What is more, PVC-O pipes characteristics become more advantageous as temperature decreases and it has been demonstrated, by a research from the National Research Council of Canada, that buried PVC pipes used for the conveyance of water perfectly accommodate the stress created by water freezing.

When PVC-O class 500 pipes operate at lower temperature, either in the most extreme cold areas of the world or in applications involving the conveyance of cold fluids, do not present significant variations in their capacity to absorb impacts as it has been recently proved with Molecor PVC-O pipes at -40 ⁰C.

Besides this, an investigation of rupture behavior was also carried out by freezing a section of PVC pipe and the result was that frost loadings did not collapse the pipe. The water inside the pipe was frozen for two years. Also a leak test conducted after the third winter indicated no damage to the pipe. Water expands about 9% upon freezing but in spite of this, expansion was effectively restrained by the surrounding soil and the pipe withstood the stresses involved.

The coefficient of thermal expansion for PVC-O pipes is 0.8 x 10-4  ⁰C-1 while for HDPE is 2.2 x 10-4  ⁰C-1, around four times higher, which means that PVC-O pipes suffer less dilatation or contraction than HDPE pipes, something that can affect pipelines, especially when trenches are opened.

In general, the capacity of plastics to absorb impacts is closely related to the temperature but in the case of PVC-O CLASS 500 pipes this capacity does not present significant variations even in the most extreme cold areas of the world.

In fact, Molecor PVC-O pipes have satisfactorily passed an impact resistance test with a weight of 10kg from 2 meters height at -40 ⁰C according to the ISO 16422. This feature, together with an increased hydraulic capacity, maximum ductility, completely corrosion resistance and water tight, among others, makes of these pipes the best choice for high-pressure fluid transport. 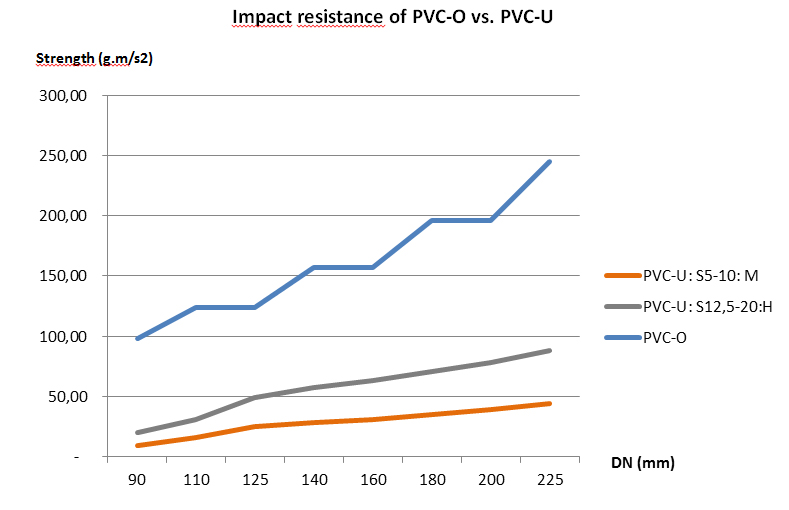