Bearing in mind the problem of global warming affecting the planet due to the greenhouse effect, many governments are planning environmental policies seeking greener and environmentally friendly solutions to apply in all areas and so maintain a proper sustainable development of the available resources.

As a contribution to improve this problem, TOM PVC-O pipes for the transport of water under pressure, become the most sustainable option that exists in the market due to their lower energy consumption and lower CO2 production associated  since they avoid unnecessary energy consumption throughout its long useful life.

The factors that determine energy efficiency throughout the lifecycle of a pipeline are mainly the type of raw material used, the production process, the finished product and its useful life.

During the lifecycle of the PVC-O pipes manufacture, we can distinguish several phases:

PVC-O pipes are manufactured by conventional extrusion and subsequent molecular orientation. The extruded base pipe, under certain conditions of pressure and temperature, is subjected to a inside stretching of the pipe, the rearrangement of the polymer molecules, forming a lamellar structure on the pipe wall which significantly improves the mechanical properties of the pipe, while keeping intact its chemical properties. 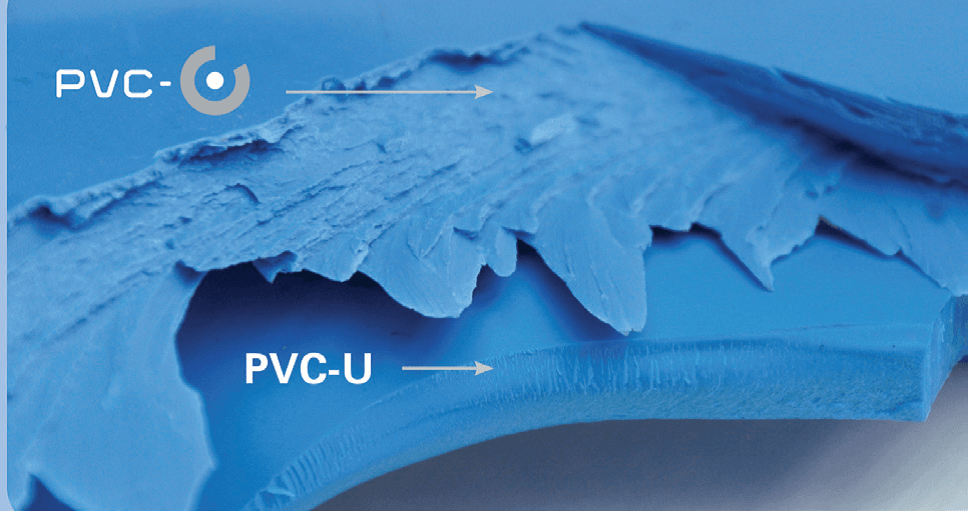 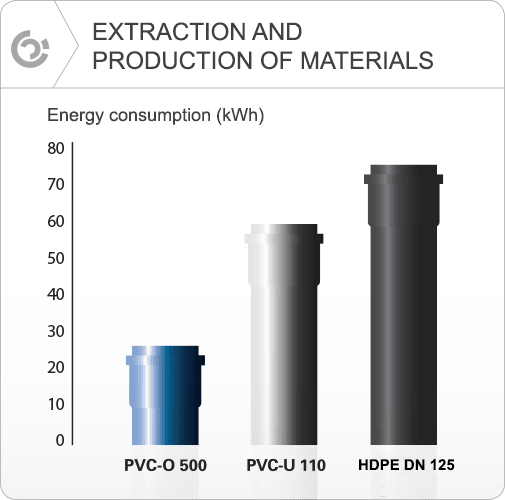 It should also be noted that the Molecor manufacturing process, worldwide patented, has great energy efficiency with which an optimization of the energy resources is also produced during the TOM® pipes production stage.

The useful life of a pipe to transport water must ensure a 50-year period as established by the regression line that determines its maximum operating tension. This useful life, begins at the time of construction of the network with the installation of the pipes. At this stage, the most important energy consumption is due to pumping.

Regarding the efficiency and energy savings that take place during this stage, we can distinguish several aspects:

Thanks to its lightness, we can transport more material, so we have fuel efficiency and minimizing CO2 emissions associated.

– Its lightness also minimizes the impact of hand work and the need for special equipment for its placement.

– The efficient design of the socket allows the pipes are assembled with great ease.

TOM® PVC-O pipes have a higher hydraulic capacity, between 15 and 40% depending on the diameter and the material with which it is being compared, so that for the same energy consumption, the transported water is always higher.

This increased hydraulic capacity is due to the greater useful section that these pipes present due to the optimization of wall thickness. Moreover, their smaller roughness causes the inner pipe surface is extremely smooth, thus the pressure losses are minimized and fluid can flow faster. All these benefits make that to transport the same amount of water less energy is needed, thus reducing energy consumption in pumping stage during use. 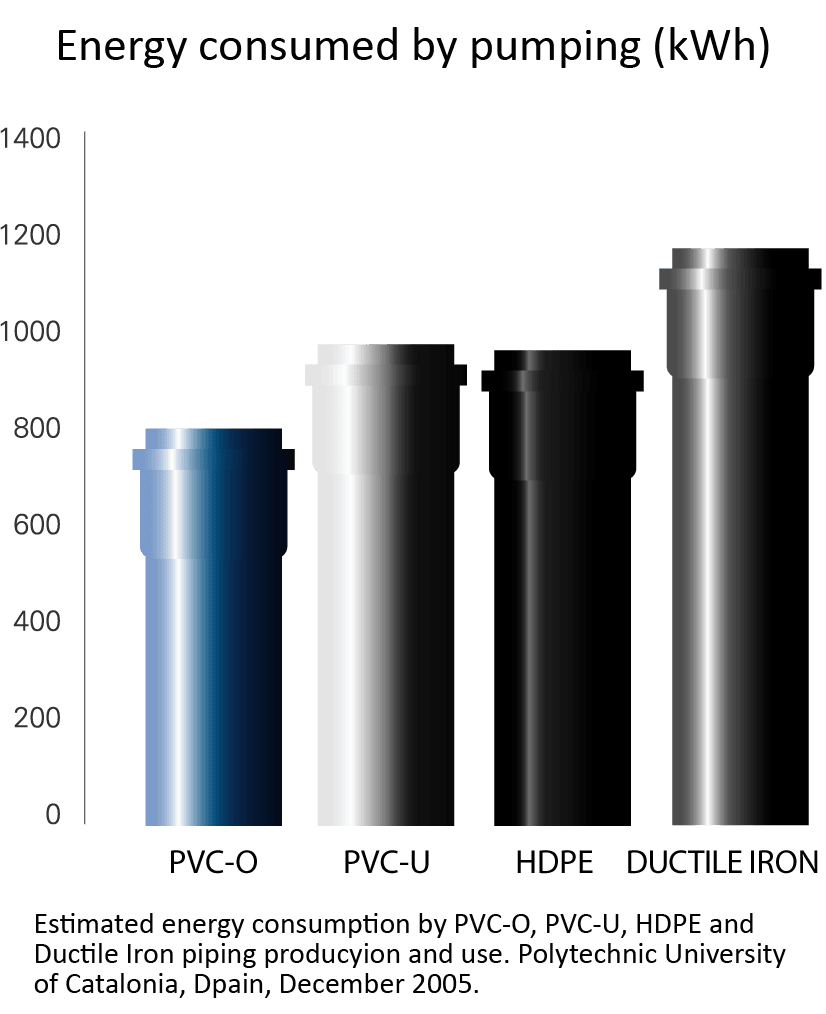 PVC is a 100% recyclable material that can be reused after its long useful life, mainly by mechanical recycling.

The PVC-O manufacturing process, due to its high technical requirement, does not allow the use of recycled materials, but allows a comprehensive management process because they can be used, after its long life cycle, in the manufacture of other plastic applications such as cable sheathing, gutters and downspouts for evacuation among others, where the technical requirements for raw materials are lower.

Thus, consumption of raw materials and also the volume of waste generated is reduced.

Promoting a culture of reuse and recycling is reflected in the report of the European Commission in April 2004, and in the voluntary commitment of the actors in the sector of waste management at European level in the Vinyl2010 and VinylPlus programs.